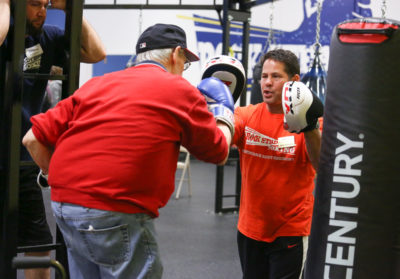 “Don’t they know what happened to Muhammad Ali?”

Yes.  Rock Steady Boxing and its affiliates are beginning boxing programs around the world for people with Parkinson’s disease.  But our boxing program is completely NON-contact.  The curriculum is designed to improve Parkinson’s symptoms through a boxing-inspired fitness regimen.  And it works.

To the outside world, this seemingly counter-intuitive concept of boxing for Parkinson’s raises eyebrows and begs the question, “Why boxing?”

Ten years ago, the evidence was very vague about the effect of exercise on Parkinson’s.  When Rock Steady’s founder, Scott Newman (diagnosed at age 39), approached his neurologist about boxing for exercise, he was told “Bad idea.  You’re going to hurt yourself.”  Luckily, Scott did not listen.

Today, there have been dozens of research studies showing that exercise may have a positive impact in management of Parkinson’s symptoms.  Any exercise for Parkinson’s can be helpful, and is encouraged, but scientific evidence suggests the most effective form of exercise is “forced intense exercise” or, pushing the body beyond perceived limitations.

In addition, research is suggesting that exercises should be intense but also directed at goal based, motor-skill learning.  In other words, coupling intense physical activity with things like repetition, challenges and duel-tasking.  This type of training can lead to neuroplasticity, which helps to maintain old connections and create new connections in the brain.  So, what type of training is most beneficial? The #1 most demanding sport?  Boxing.

Boxers have to train for a diversity of goals to become an optimal fighter.  Boxers must work on strength, hand-eye coordination, speed, balance, agility and focus.  Each boxing exercise has a purpose and a reason.  Many of the skills that boxers are training to improve upon can be issues for people with Parkinson’s.

In today’s fitness industry, non-contact boxing for fitness is becoming increasing popular.  People are realizing that they do not have to become an actual fighter to reap the health benefits of boxing.  The workouts are diverse, intense, and a tremendous stress reliever.  And with so many activities involved in a boxer’s workout – it is fun and you never get bored!

Rock Steady Boxing is more than just a boxing program.  In addition to boxing, we focus on functional activities to help people become more independent in their day-to-day lives.  Activities are designed to improve issues such as gait, falling, dexterity, multi-tasking and restore confidence.

People with Parkinson’s can sometimes battle depression and isolation due to a combination of symptoms and life changes.  Rock Steady provides an encouraging, safe and fun atmosphere where people can shake, rattle and roll with their buddies!

At first glance, Rock Steady might seem like any other boxing gym.  But at its very foundation Rock Steady Boxing is a hybrid between intense exercise and creativity with a solid knowledge of Parkinson’s.

And while we are big fans of all exercise, boxing is what sets us apart.  Boxing is the most demanding, comprehensive, fun and the most badass way to FIGHT BACK against Parkinson’s. – Kristy Rose Follmar

Kristy Rose Follmar, ACSM CPT/NASM CES, is the Program Director & Head Coach at RSB Headquarters.  She is a three-time, world champion professional boxer.  She has been with RSB since 2006 and is the driving force for the development of the Rock Steady Method of fighting back against Parkinson’s Disease.